An architectural jewel: Palazzo Marletta may be considered as the emblem of that Baroque architectural style which has left a strong historical mark on the evolution of the city of Catania, from period that followed the earthquake of 1693 to the present day. The palace represents Catania in all its Baroque tradition, both for its exterior and for the beauty it encloses within its walls. It is an architectural jewel set in the historical panorama of Catania.

A view of the Piazza Duomo of Leon du Fourny operating in Catania at the end of the eighteenth century, shows the original prospect, as described in the commission for the carvings given to Alonzo di Benedetto in 1694. In fact, in the archive records, Mastro Alonzo di Benedetto “Lapidor incisor” of Catania, among the expense notes, declares to have received from Vincenzo Marletta on 6th
August 1696 the sum of onze 52.710 for all work on the arches of the white stone shops and for the artisans who worked on it. The building, by the architect Francesco Battaglia, is of particular historical, artistic, and monumental interest, as an example of eighteenth-century architecture. It complies with the rules established at the end of the seventeenth century about the height of the buildings after the earthquake of 1693. 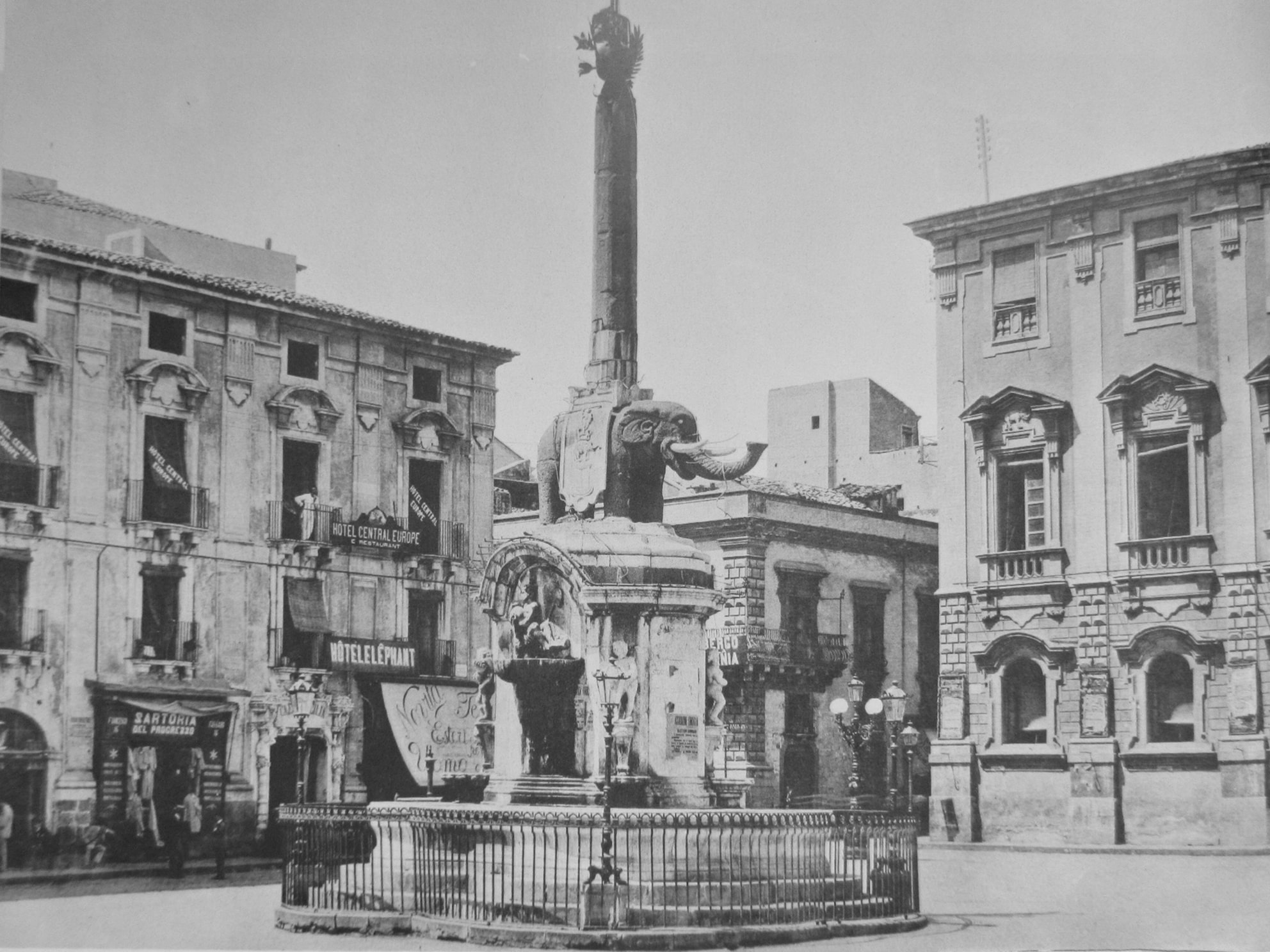 The angular prospect between Via Marletta and Via Vittorio Emanuele, is the focal point of the building, highlighted by the white stone ashlar in contrast with the lava stone base. This is strengthened by the balcony with iron “goose-breasted” railing and supported by shelves also in white stone, variously molded. The entrance portal on Via Merletta n ° 7 has an arched opening surrounded by white stone jambs, flanked laterally by smooth ashlar. There are five molded shelves decorated frontally with bas-relief in allegorical figures that support the balcony with goose chest iron railing. The overlying opening presents the white stone jambs, surmounted by bas-relief decorations. The architect Lo Jacono, formerly Superintendent, saw in the façade, successive interventions by Francesco Battaglia. Some interiors, including the main hall, feature stucco work and decorations from the late 18th and early 19th centuries. Other rooms, especially on the ground floor, used for commercial use, were lofted before the fifties. The building has a partial twentieth-century elevation and internal maintenance and change of intended use that have not altered the original distribution. The principal floor that can be reached from the main staircase is composed of various rooms with vaulted frescoed ceilings. Inside the main floor there are two communicating stairs, which lead to the mezzanine rooms intended for servants These make the two wings of the building independent, testifying the probable use of the noble floor of two families since its origin. The rooms of the noble floor are 25 square meters, surmounted by pavilion vaults in cane and plaster with various decorations, with balconies looking out onto Piazza Duomo. The traditional majolica floors consist of terracotta tiles decorated by hand in geometric and floral motifs.
Questo sito Web utilizza i cookie per migliorare la tua esperienza. Supponiamo che ti vada bene, ma puoi cambiare le impostazioni se lo desideri. Impostazioni CookieLeggi la formativa sulla privacy e cookieACCETTA
Privacy & Cookies Policy

Any cookies that may not be particularly necessary for the website to function and is used specifically to collect user personal data via analytics, ads, other embedded contents are termed as non-necessary cookies. It is mandatory to procure user consent prior to running these cookies on your website.